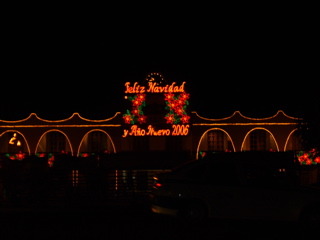 We just got back Mexico on Wednesday, and life has been pretty hectic around Casa Keller since, so I’m just now sitting down to write about the trip. We were in Cancun, we’d booked our trip before the Wilma and our hotel must have been one of the first to get back up and running. Most are not yet in business. Some of the bigger hotels are still in the process of being gutted, so they can be completely redone inside. I think only about 10 percent of the rooms are actually open. Which of course is killing the economy. Walking through downtown, past empty restaurants, you’re practically dragged into them by shills in front of every one. It was nice for us because it wasn’t crowded, but for the people, this must be a very tough time. 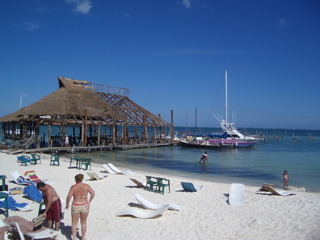 We stayed at the Imperial las Perlas, a three star hotel, the first hotel on hotel row before you get to downtown. It was clean, the people were friendly and helpful and most things worked. Our first room was absoutely the worst room in the place. In the back, on the first floor, our view consisted of the back of a pickup truck. On the second day we asked to be moved and got a bigger room, overlooking the beach. Once again the squeaking wheel gets lubed. 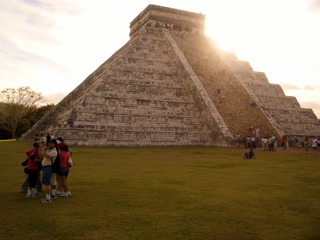 We were there for four days, we spent one day going to the ruins at Chichen Itza, a couple of hours inland, where the famous Mayan pyramid is. The Mayan’s motto must have been “A virgin a day keeps the Sun God at bay.” They felt that if they didn’t sacrifice a virgin every morning before the sun rose, it wouldn’t come up. Now these folks had a very sophisticated understanding of mathematics and astrology, wouldn’t you think they’d figure out that the sun would come up anyway? I guess it’s the same old story of religion keeping power over the masses. Not much different than forty percent of Americans not believing in evolution I guess.

Then we took the “Jungle Tour” which really wasn’t a jungle tour, but it still had a high fun factor. You get in these tiny fiberglass speed boats with 35 horse outboards (they’re really not as safety crazy in Mexico as we are) and buzz around the Lagoon for awhile and then take a channel through the mangrove swamp to a coral reef in the ocean, where you snorkel in a national park. We had a great time and Beck even overcame her fear of water to snorkel with us. We saw some wildly colored fish, some of which looked like argyle socks. 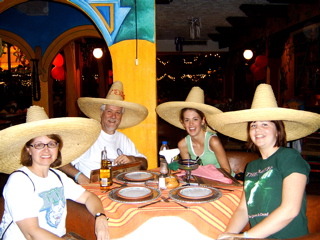 On Christmas day we had an amazing dining experience. I’m usually not into the audience participation thing, but these guys put on a show that gets everyone rockin’. We had so much fun. These people put on an amazing show, even though they were up until 5 am on Christmas Eve, their biggest night. They had several dwarves, one in a devil costume patrolling the floor and joking with the customers, and the waiters just wouldn’t let up with the joking around. It was such a hoot. Perico’s is the name of the place, don’t go if you’re looking for a quiet romantic dinner. 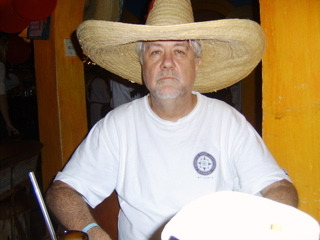 Random observations on Mexico, vacations in general and travelling with your family.
I’d like to blame the water or the food, but it started before we left, I was having a nasty flair up of Crohn’s disease the whole time down there. It didn’t keep me from having a good time overall, but it made me kind of crabby and weak at times. And nervous about finding a bathroom fast enough.

Speaking of bathrooms, I have a little bit of a hard time with the not flushing your toilet paper thing. As an American, if feel that I have the unalienable right to flush my toilet paper. Putting your dirty toilet paper in a waste basket next to the commode seems like a violation of my privacy.

Every vendor made their products themselves, they’re almost free for you today, and if that’s not cheap enough….how much do you want to pay?

On the plane ride back, there were lots of empty seats, so I took one in the exit row. I was wearing shorts and had my jeans in my backpack, ready for the cold weather. There was no one around me, so I moved to the window seat and quickly slipped off my shorts and into my jeans. My daughters were disgusted when I told them what I’d done. Lucia said, “Don’t ever do anything like that again. That’s such a creepy old man thing to do!” I was kind of proud of myself for pulling it off undetected.

Travelling in strange cities can be very stressfull. The first night we went downtown, we ended up unexpectedly in a place where we had to transfer busses to get where we wanted to go. After solving a communication problem with the bus driver, I figured out what we needed to do. No one believed me. They wanted to take a course of action that could have gotten us completely lost, and would have at least resulted in way more walking than I wanted to do. Even though I’d been downtown once already, had been to the place where we wanted to go, had corroborated my understanding with one more local, and was very sure of what we should do, they kept arguing with me. I popped a bolt. One of the passers by, “Senior, be nice to the lady, you’re on vacation!” The street vendor who I’d confirmed my directions with came over and calmed me down and backed up my side of the story. Ah vindication. Good thing we skipped our original destination and went to Perico’s right away.

On the first night, we found ourselves without cash, because of poor planning and a mistaken confidence about places accepting credit cards and the availability of ATMs. Long story short: we ended up eating at a buffet at another hotel, because they took credit cards. The food was mediocre at best. They charged us 250 pesos each, so about a hundred bucks total. Perico’s came in at less than a hundred, with drinks, great food and the amazing show! The next night we had a great dinner in a beautiful outdoor setting, including drinks and a flaming mango dessert for under forty dollars.

If you go to Cancun, go downtown. Get off the hotel strip and into the city. Some of the Anglos at the hotel were afraid of getting into a “bad nieghborhood” and I suppose that’s possible, but we never felt uneasy in the least.